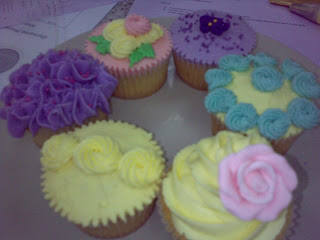 The above are my my hasil kerja kerastangan, the result of a 2-hour Cupcake 101 teaching that I got from Nancy Tan of Cake Connection in PJ.

Last Saturday, I decided to enrol myself into 2 cupcake decorating classes! Hubby and the girls were not around as they left for Muar for a khenduri tahlil at MIL's. I had signed up for the classes earlier and furthermore I had to ferry Ibraheem and Umar for their Lorna's classes on Saturday, and Yusof's tuition on Sunday. So, apa lagi, after I did my usual marketing at Pasar Tani and roti canai breaky with hubby, I left my house heading towards my father's house in Shah Alam...I had to ask dad's favour to send the kids to Lorna, as I wouldn't have time in between the classes to do that.

I reached Cake Connection at around 9.40, and was very nervous...what if I'm the only one who's a true beginner?? And I didn't know anyone else....

Well, there were 8 or 9 of us, 2 very young girls who had just finished their SPM..they were taking notes and asking questions like real students....moi??? I just listened and observed and ask very few questions. The class was good fun, we broke the ice amongst each other when we started decorating the cakes.

For someone who had not baked before (I love to cook to baking, as with cooking, you can just campak...and somehow, the dish will turn out ok!) Nancy gave her recipe for vanilla cupcakes, which I tried yesterday....sedaap...it has the texture and the milky creamy taste that I have been looking for! She also gave tips on making buttercream to set and have a more consistent texture.....love it love it love it...and of course the correct way to do swirls....they are my favourites...yes the class was very basic, but I learnt heaps that day...instead of finishing at 12.00, we finished at 1.00. I, of course had to make some purchases from their shop, I have to make 100 cupcakes for a little girl's birthday next week...so I bought those cute doll candles, and some other baking stuff......

This is the kitchen top where we had our fun time learning and decorating 6 cupcakes....i love the lemon yellow and lilac colour!! 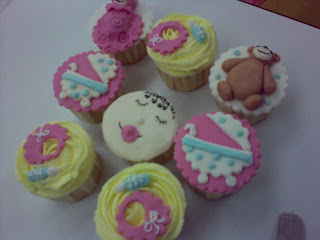 Those are my works from Baby Shower Cupcakes class...

Next, I dashed around the corner of Section 17 and head towards Section 14, pulak. It is where ICCA, Wilton's shop and training centre is located. Found a parking spot, dropped by their retail shop first to get a small rolling pin, brushes and angled spatula, before going up to the Baby Shower Cupcakes class.....I expect people who were already in the industry to be in this class....so I was even more nervous...and to top it off, I have never handled fondant before, ayya ya!!

There were so many of them, from my risik-risik, they are already making and taking orders for cakes and such.....I thought hmm...bulldoze ajelah, pretend that I pun like them.....I sat next to this Japaneses lady, Kyoko...who had completed Wilton's decorating classes from Module 1 until 3!!! Dah boleh jadi instructor tu!!

The class was fun, but very hectic and taxing, we had to do 4 designs in 2 hours!!! Knead, roll, tekan, colour, paste...I heaved and pant, but was very very satisfied. The instructor Lyn Hassan and her assistant Aza were fabulous! And I couldn't be happier at the end of the class, now that I have learned to make that cute bear, yeehah!!! I also made new friends, bakers and I have to see their works..That day, ada yang brought along their cupcake caddy, fuyoh!!

Ok, I think enough of those classes, next I will be learning from Whiz, sugar flowers, fondant flowers, miniature cakes and how to cover whole cakes....can't wait, can't wait. You can look out for Whiz's works at inawhiz.blogspot.com. I will doing Wilton's Module 1 until 3 after I deliver and I'll decide if I'll go for an instructor course after that.....I think despite all that being tired and kelam kabut, the classes were very calming and therapeutic! And I think baking and cooking is where I belong!!

Because I was so happy that day, I let Ibraheem and Umar bullied me, I took them to have meatballs at Ikea, even though I was so bruised that day!
Cooked up by KG at 11:49

Salam. Seronoknya. I luv 'em all.

You attended two classes in a day! Wow, passion punya pasal. I am surprise to know you are a beginner, macam I jugak. I love the pram and the cute teddy bear.

you ni siapa ek?! Thnx for dropping by.

You can also google for Cake Connection and look at their website. Speak to Nancy!

KG: You are truly inspirational and amazing...mana la u dapat all this energy - you put me to shame...Love them cuppies. Nanti nak order boleh ka..motive for mums apa yang sesuai...

if you don't mind, can you please email me at sha.amha@gmail.com.

Hope to hear from you soon!

wow, am truly impressed. If only i have the time to attend these classes, BUT, i need to buy a new oven first.

found a brilliant tok guru to learn fondant, sugar paste and do figurines...will do the wilton 1, 2 3 and 4 module after my delivery!

will email you, sorry for the delay...my laptop broke last wednesday, and i only got a replacement on friday...so tergendala urusan on the net kejap!

am sure you can do it...ornag seni like you banyak talent...i yg keras tangan bolehlah gagah gagah!

Yanie, I am so happy for you. At least when you come to my class you will know the basic and you won't take that long a time to do. My class is of something diferent, so you don't have to worry for the overlapping modules. I am so sorry about this weekend. It was a last minute decision for me and I had to cnacel about 5 orders because of it. But hopefully insyaAllah the rewards will come in other ways kan.

Hope to see you soon Yanie. Do get back to me on the next best date ok.

I've been looking at yr work too, mmm lovely! Thanks for the invitation, will do!