Muhammad in APSH
When it rains, it really pours...Muhammad was admitted in APSH again on Tuesday due to bronchitis. I was just recovering from a long bout of cough and cold and am still grappling with the current situation...but that's life. So, I have to put on hold my routines when it comes to this blog and slowly move myself towards normalcy again..
Apart from my sil, a lot had taken place lately, but all shall be kept to myself. I am bracing myself for yet another change, it is really daunting but I have to take that big leap and DO IT! This feeling is similar to that when I finished reading Who Moved My Cheese and when I jumped from banking to legal.....

I will update stories on cakes and recipes next week, I still haven't found the time to upload photos from my dslr....whatever it is I am really grateful for the support that I have been receiving from friends from this blogsphere, you all are amazing, thank you! 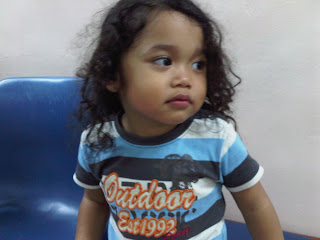 Hajar, as cheeky as ever in one of her favourite t-shirt that belongs to Muhammad! 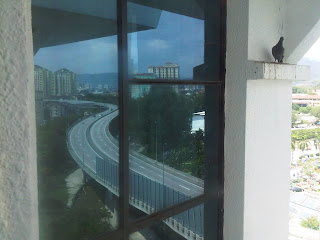 That bird is me, looking at the winding road.....
Last but not least for now, all I can say what is written here "tersurat" is far from what is in me "tersirat"....take care folks!
Cooked up by KG at 10:51 11 comments:

My hands feel so heavy, I can't bring them to compose a proper sentence...there are many pictures of cakes and stories behind them, stories about my children, stories about how I feel about my future...but numb is the best word to describe my feelings now....she has completed her second cycle of chemo about 15 days ago, but she is fighting some sort of infection that manifest itself that is known to me as fever and shivers for the past 9 days...I tell people who visited her to show a happy face, a big smile but I have to fight back tears everytime I see her, caress her or apply olive oil on her body...I can't imagine the pain she is going through, looking at her is painful enough for me...
Cooked up by KG at 17:12 11 comments: 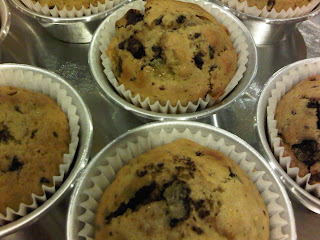 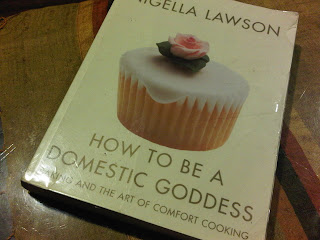 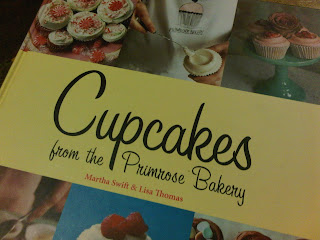 This post is dedicated to Kak Zai Day in Day out...hmm finally.... And yes, I love bananas, especially pisang emas, well, what do you expect from a kampung girl from Baling nih! Remember my posting on Carrot Cake with bananas in it, this one is Chocolate Banana Cake.
Actually, I have found two versions of the cake, one that has chocolate pieces in it and the other with cocoa powder all incorporated in the batter. I have tried the earlier.... and of course, not being a master in baking I have to tweak the recipe again, he he he....I sort of merged the original recipe from Cupcakes From The Primrose Bakery with that of How To Be A Domestic Goddess, and the result .....jeng jeng jeng is this:
Chocolate Banana Cake
125 g unsalted butter
150 g caster sugar
1 teaspoon vanilla extract
3 ripe bananas, I used pisang emas
100 ml buttermilk
2 large eggs
1 teaspoon bicarbonate soda
1/2 teaspoon baking powder
300 g plain flour
50 g dark chocolate chopped
Preheat oven to the temperature that you are used to like 170C.
Melt the butter in a saucepan, take off the heat, add the sugar, vanilla and soft bananas, mashing them with a fork in the pan. Stir in the buttermilk and the eggs, and beat to mix using a wooden spoon. Add the bicarbonate soda and baking powder, and stir in as well, and then finally stir in the flour and the chocolate. When the mixture is well blended, divide equally amongst muffin cases. I made 36 using medium muffin cases.
These are lovely with a blob of cream cheese for afternoon tea....mmmmm..loved the banana and vanilla aroma....
Cooked up by KG at 16:11 5 comments:

The last two weeks after I did a short stint in Alor Star with my lovely friends, I had been very busy, in the office and at home. Alhamdullillah things are moving smoothly, especially with the kids and their school, all are almost back to the usual routine. A marked change is seen in Yusof after he decided to enrol himself in the Tahfiz Program in school, alhamdulillah...but he is still very cheeky and talkative in class, according to his ustaz. At home he is more diligent and annoys his siblings less!

And, alhamdullillah the orders have come rolling the past two weeks, and I made sure most are concentrated towards the weekend. So, that leaves me with time to see to the children's homework at night. So, here are the orders that I have made.... 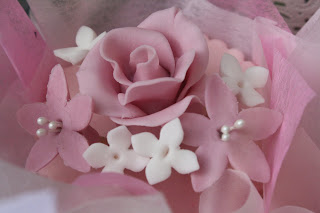 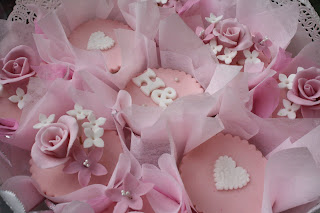 Roses to the hearts for Harizul and Haris, thank you Aya for the order! 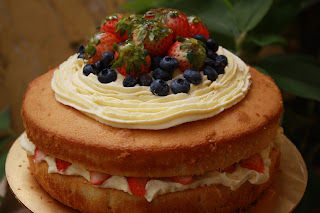 Memanjakan my friend Aini who is now a lady of leisure after she left employment with this vanilla cake sandwiched and topped with vanilla plus cream cheese and fresh strawberries and blueberries...hmmm am thinking of summer in London. Thanks Aini for this order. 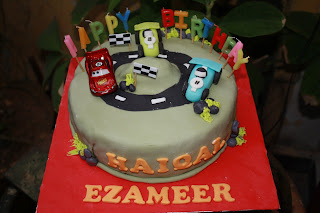 And this, what can I say, naik semua muscle I kneading the fondant, the blue and green racing cars were made based on tutorial by http://www.cakejournal.com/, the McQueen was real toy!Happy birthday Haiqal and thank you Lorina! 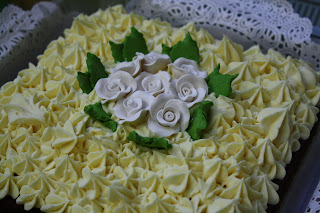 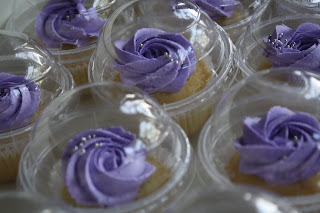 I made a couple of hundreds of this for khenduri tahlil my biras Kak Zaine, thank you Kak Zaine! 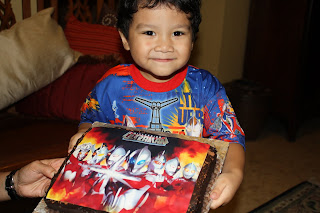 "Mummy, macam dalam computer mummy", happily he said when he saw this cake...Nizar and his Ultraman cake. Moist chocolate cake with chocolate fudge and ganache, a treat by mummy Mrs N...thank you BJ! 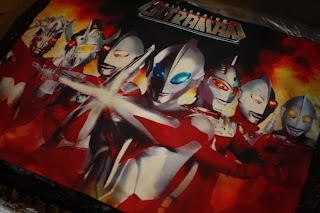 I too love this image! 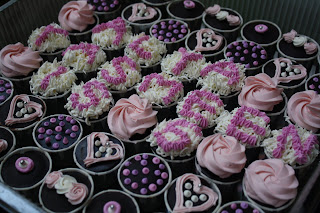 Happy Birthday Alya Yasmeen! Mini moist chocolate cake with ganache ordered by my colleague in the number one telco company, thank you Azura! 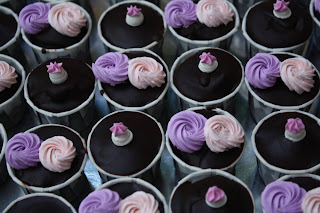 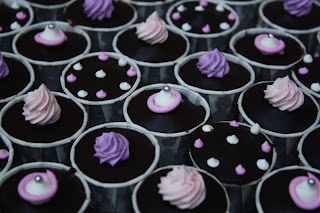 these are for the kindi!
And alhamdulillah, for a life that I think is so sempurna, I am so blessed....
Cooked up by KG at 09:15 5 comments: 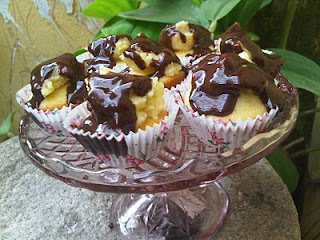 Yup, I have decided to take up this quest to bake a few recipes from Marha Stewarts' Cupcake book. The invitation came from a fellow blogger and a group called http://friendswhobake.blogspot.com. The last time I tried Martha's recipe when I first started baking, and I used the same measuring cup for liquid and flour..........of course what was supposed to become banana caramel cake turned out like bengkang, ha ha! After that I have never tried Martha's recipe anymore.

One of the reason is mainly the measuring that she uses, or for most Americans in their baking...err 1 stick of butter, 1 tablespoon...so for this challenge, I made sure that my conversion is as accurate as possible, to avoid another bengkang like cake ! And, the result, what can I say, LUXURIOUS!! Of course me being me, and being creative maybe at the wrong time and place I tweaked the recipe a bit, but hey, after all said and done and the cakes were ready, DH couldn't stop taking his hands off the little gems...I decided to bake mine in mini muffin tins, so the batter gave about 48 mini cakes. I couldn't slice the cakes and slot the vanilla pastry cream in between, so, I slathered them on top of the cakes instead and pour the chocolate ganache after that. And the idea is to pop the entire cake at one go so you can taste the cake, vanilla pastry cream and chocolate ganache all at the same time!

I realise most American recipes are a bit on the sweetish side, so I reduced my sugar, and omitted the corn syrup in the ganache totally. I used half and half Herscheys semisweet chocolate chips and Valrhona chocolate buttons, so the ganache was chocolaty and bitter at the same time.....mmmmm, I love it! I posted the above picture in FB and had three friends came over to sample the little gems! And they want MORE! Okay lepas ni buat sendiri ye! Resepinya di bawah.....

Preheat oven to 170C, prepare muffin tins by brushing with butter. Whisk together flour, baking powder and salt. Combine butter and milk in a saucepan, set over very low heat.

Bring milk and butter to boil. With low speed mixer add hot milk mixture in a slow, steady stream, mix until smooth (do not over mix), beat in vanilla.

To finish, user a serrated knife to split the cupcakes horizontally. spread 1 tablespoon pastry cream on the bottom of each cupcake, replace top halves (I omitted this as I had mine in mini muffin tins!). Spoon about 1 tablespoon chocolate glaze over each cupcake, refrigerate 30 minutes before serving.

Whisk yolk until smooth in a large bowl. Combine sugar, cornflour and salt in a medium saucepan and heat over medium. Stirring constantly gradually add milk in a slow steady stream and cook until mixture thickens and begin to bubble about 5 minutes.

Strain mixture through a fine sieve into a heat prove bowl. Cover with plastic wrap, to prevent a skin from forming. Set to cool and refrigerate. I prepared mine while waiting for the cupcakes to cook!

Heat the heavy cream on medium fire until almost boiling point, remove. Add in the chocolate and stir constantly until all smooth, add the corn syrup.