I Will Not Allow That To Dampen My Spirit! 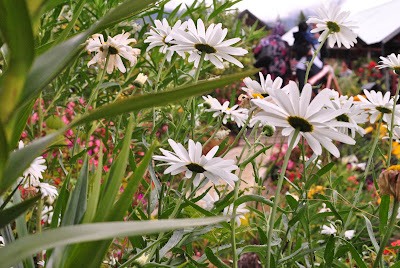 There was a time when I had to count my pennies and cents, when I was jobless and the nights seem eternal, I had to say Istighfar and Bismillah till I fell asleep...all due to the doings of two reckless and irresponsible greedy ladies who were willing to feed their children with "duit haram" that they took from their office over a period of time..leaving their poor boss to skim on his salary that came once in every two or three months....

This time, the blow is worse! More than half million RM left the clients' account, all through the doings of a young sweet demure girl who came to work only for two weeks...I had not met her, but she forged the boss's signature, uplifted FD's, forged cheques, but thank God, initially the number was more than a million RM! The boss came home last Monday looking like he had not eaten for a year....I was shaken, too. My husband had fallen prey to a professional thief!

Hesitant as I may, I contacted and sought the help friends of my law school, one a very senior police officer and the other a senior member of the Bar, all just to speed up the investigation process and to ensure that the culprit is not spared from justice, and keep repeating the heinous act! To soothe myself I spoke to very close friends about this (you know who you are)...and my mind wondered on how to recover the monies (even if I sell all my belonging I won't collect that figure!)....definitely I can't quit this job, it was this job that came rolling to me during the earlier crisis (my ex-boss called me to come in!God is great and has His mysterious ways of arranging things!) and thank God for the new skill...baking!

We had bought tickets, rented cars and paid for accommodations for our holiday in Sabah the next day, which I wanted to shelf...but my dear Chut said, just go and let the things work their way....and I am glad we went for the holiday! Investigations are underway, she is now in the police's list "To Arrest", and I can only hope and pray and do loads of Sembahyang Hajat that everything will be fine like He wants it to be......there were wisdom and lessons learnt during the earlier crisis and believe me the rezeki was abundance after that "tiny" glitch....I will not allow this to dampen my spirit, I'm forging forward but still wondering the wisdom behind all this...but definitely I feel closer to Him than ever before....you won't taste the sweetness of life if you hadn't feel the bitterness.....

So, off we flew to to Negeri Di bawah Bayu on Tuesday, I declined all orders last week and let my oven to cool and rest and the picture above is a teaser of the beautiful findings in Sabah! God bless you people, have a brilliant week!
Cooked up by KG at 11:16

Berat mata memandang berat lagi bahu yang memikul. I can only sympathise with what the both of you are going through right now. Allah tu Maha Kaya dan Maha Mengetahui. Sudah tentu ada hikmah disebalik this unfortunate incident. Chin up, Yani, may you be in His grace always.

Yanie, I am figuring something out for me and if it works I will yank you along. But I believe it will and I want both of us to benefit from it. InsyaAllah k. We'll do this together and maybe we can find people who share the same financial dilemma to join us.I can already see the light at the end of the tunnel.

Yani, so sorry to know abt what happened , read Shila's post on this and was wondering what was the damage like.....didnt expect it to be that huge.....take care ya

Yani,
I pray that everything will sort itself and that you and family will be spared any hardships. May Allah bless you all.

I share your misery. Our firm's money pun kene kapo dgn staff. I know how miserable it is. Tho it happened 5years ago and the fact the husband (partner in crime) returned RM100k, sakit & seksanye masih terasa till today. Hopefully your husband can recover the money and moga Allah permudahkan bagi you all.

we were destined to meet!tqs

kak zai,
tqs, it can happen to anyone, so you too, take care!jgn lupa profiteroles session!

The best wishes I can get! thank you let's recite lailahanata...

wasani,
tqs for dropping by! yes sakit yang loss dulu baru nak subside...guess i have to harung another challenge, must be some hikmah behind this, and Allah wants to test my patience for maybe some bigger stuff later!

Kak Yani,
so sorry to hear about the situation you are in. InsyaAllah doa orang yang teraniaya ni akan dimakbulkan Allah. You stay strong Kak Yani

Yani.....so sorry to hear what happened to you...i went thru the same thing the no money part, and itu pun dah half nak pengsan but what you went thru lagi teruk. Tapi I know you and Haq are strong and you will always have my prayers.

My heart goes out to you and Haq...remember always that Allah SWT sentiasa bersama org yang benar. Lets increase our prayers and supplications so that justice is served on those heartless individuals and that you will o through this with redha, tawakal and penuh kesabaran. Take care and if you need anything - do let me know!

kita semua ada bahagian masing-masing, you you , me me...redha sajalah, it's not tt difficult, inshaallaah!

i know i have your ears and shoulders to cry on...yup, my iman and taqwa is not up to mark, tt's why Allah is reminding me through all this...