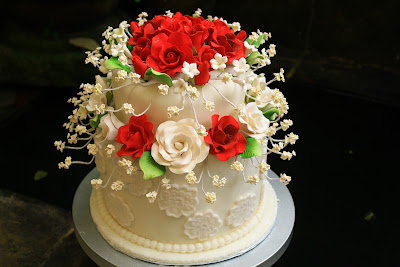 I have known Aida since Shila came back from the UK...and since then we have been looking (well, sort of) for a spouse for Aida! And after all this years, the big day came last Friday! Earlier Aida requested me to make a hantaran cake (gift) for the groom during their engagement...and after waiting for months, last month Aida shared with me the photo of her wedding cake! I was all so excited doing this cake, even though I had to run off to PD for a Workshop on Friday, only to come back late on Saturday, hence missing her reception! I tell you, her father was most excited when he came to collect the cake, and I heard it was tearfiul event when she was "given" away during the Akad Nikah..it was tears of joy as I think everybody was anxiously waiting for this special day for Aida!
I also made this Dorie Greenspan's Split Level Pudding for a dozen pax for the main table's dessert. Initially I wanted to make Black Forest Trifle, but had to shelve that idea as I had to prepare the dessert early, the chocolate cake would have gone soggy by Saturday, had I made the trifle....well, now everyone is lega, Aida has  gone for her honeymoon...next would perhaps be Baby Showers...ehem.... 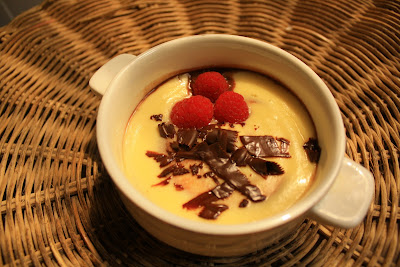 Enjoy this song....bought Glee's soundtrack, apparently your songs have not made it unless they are sung by Glee :p
Cooked up by KG at 15:06

Email ThisBlogThis!Share to TwitterShare to FacebookShare to Pinterest
Labels: Bakes and Cakes

You didn't do the flowers yg maroon ker? Alal teruk2 je I duk tunjuk kat you. Nevertheless, this is stunning jugak. Lawa2.

Aunty Yani,
If ever I get married, will you bake me a cake? Entah bilalah tu...fiance #4 belum jumpa lagi. purrr....meow!