Hmmm, I've been updating my blog almost regularly lately...you might wonder if I had been so free, lately...not...the waves (read: in the office and at home!) are coming...but I know I owe you some recipes...
Well, what do you do when you have almost abundance of yolks left after the whites were taken and made into macarons....I have been feeding my Ginger Torch plants in my kitchen and my Daun Kesum and Mint leaves...but I just could't rid of them yolks anymore.....so, I decided to make Choc Mousse two nights ago and will be attempting Creme Brulee, soon!
So, here goes.... 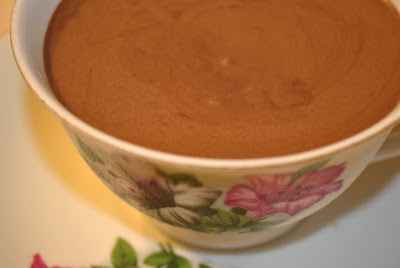 Ingredients
40g egg yolks, from about two eggs
30g caster sugar, about 2 tbsp
30ml water
170g dark chocolate
300g heavy cream, I used whipping cream
Method
1.Whip heavy cream until soft peaks, set aside.
2.Using double boiling method, melt the dark chocolate and set aside.
3. Whip the yolks until pale and frothy.
4.Make sugar syrup by boiling water and sugar until boiling point and at a temperature of 150Celcius.
5.Slowly pour the sugar syrup into the whipped yolks, and keep whipping until the mixture cools down.
6.Incorporate the melted chocolate into the sugar syrup and yolk mixture.
7.Lastly, add the whipped heavy cream in three additions, until all the mixture is well incorporated.
8. Pour into containers and leave to set in the fridge over night.
This recipe was obtained from Su of Delectables ! 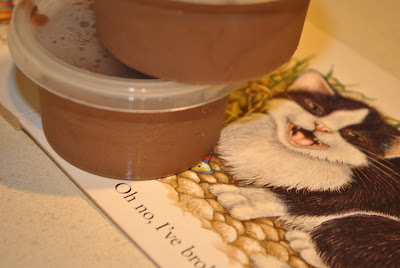 ....and I brought two tubs when I had lunch with Sham, my quirky full of wisdom friend, over at razak's floracafe at Ampwalk yesterday. Sham did the renovation works for Razak's cafe! The delightful choc mousse were shared between me, Sham, Vida (whom I considered all time Ms Peens) and Zuri (one of Razak's designers)...ahhh...it was one of those days that I thought the universe belongs to me and it was total bliss....
Cooked up by KG at 10:30

Email ThisBlogThis!Share to TwitterShare to FacebookShare to Pinterest
Labels: Recipes

I love anything chocolate, so I"m sure I would love these..thanks for the recipe!

p/s: it's been awhile since I felt the universe belonged to me..must make that feeling happen!! :D