Today is the 15th day of Syawal, but the memories of Ramadhan and Eidul Fitri just felt like a dream to me ...I have been super busy in the office and also at home. Where and what I do, the thing that I dread most is for something major to take place with the network, as it would have a direct implication as to whether I return home early from office or the other way round!
Everything was alright with the network until the fourth and fifth day of Eid....due to massive traffic, the "hlr" which is core to any telco network became heavily congested and went "numb"! And because of this I suspect that the network guys will have to tweak the system, which moi as the executor of the contract documents will also be implicated in churning new or supplementary documents....which also means that there will be more workload to the already heavy workload...sigh....
Anyway, we celebrated raya in Muar on the first day and moved towards Batu Pahat, going down south to Senggarang, Pontian and Johor Bahru. After what I went through with the "kampung" folks...well they are not so kampunglah as compared to me, but the suasana kampung was definitely more merry than here in KL's open houses. I notice there were no open houses, but the families that we visited actually prepared dishes as if waiting for guests...unlike here in KL, open houses have become like a special event, and for years moi have also been part of this open houses events...we should do it like how the kampung folks do it-lah, I think......so inshaallah, from next Eid, I will prepare heavy dishes like rice and stuff even without gusests informing me first that they are coming over.........
In the mean time enjoy this photos that will tell its stories..... 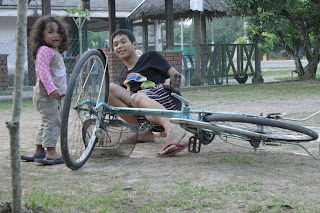 Yusof and Hajar, one week before Eid in Ayer Baloi, hubby balik kampung to clean up the house for raya! 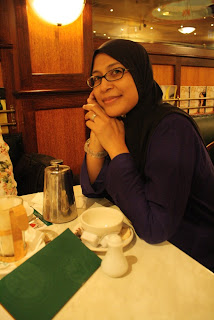 Moi...perasan ayu! Photo taken by Khadijah during our one and only buka puasa outside @ Dome KLCC with dear friends Bad and Liza and our kiddos...no Naz I was not on the phone :-) 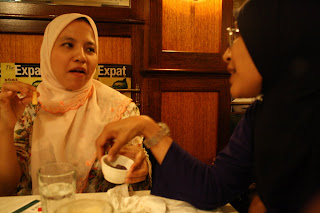 It was more borak than makan for me and Liza, we hadn't met for close to a month after she saw me a week after I delivered Muhammad, she had been busy with her preparation for finals Masters exam due in November. Liza will be a fine family medicine pratitioner, I hope she will join my sister's team in UMMC! 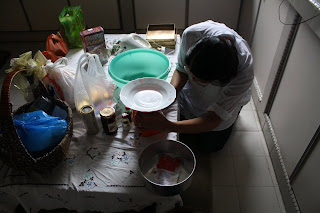 As soon as I arrive in Muar on Saturday morning, the day before Eid, MIL mintak tolong I bake sandwich cakes and upside down cakes...since, I now bake hi hi!! 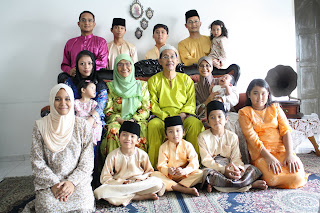 All in Ahmad Umar's family minus Azura and family who raya-ed in Lenggong this year! 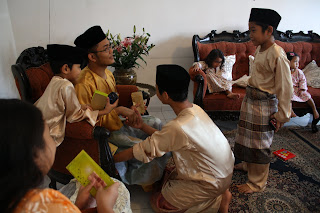 My kiddos didn't want to salam with me, because they said I had and said so many don'ts to them...I'm the evil one at home, that's how I thrive !! 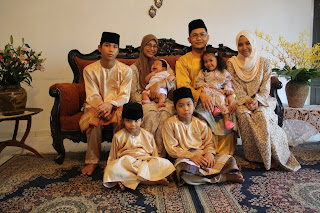 I think u all nyer raya colour theme is same as ours this year :-)

Yani,
I love that ayu picture...phone or no phone (although I KNOW there WAS a phone there...haha!).
Nice family pic. There is one word for little Muhammad from me....
Masyaallah! :D
I look forward to hold him in my arms. How big is he now?
Hugs to Little Hajar too OK.