Like I made macarons successfully many many months ago...I jumped with joy when my macarons started showing their feet last night...I attempted the Italian Meringue method..woo hoo! I had a postponement for a macaron order, so...I took the opportunity to give this method a go!
....and what can I say...I might convert from the classic French meringue method to this...it was like doing step 1, 2, 3...and so on and so forth...and knowing that the result would be a good one! I had taken the recipe and method from Sue, whose blog I had been following ever since I started attempting making macarons!...you know, the thing that I feared most when doing this last night was the thermometer.....why!??? I don't know!!
I followed Sue's step by step method to the t! So...here goes! 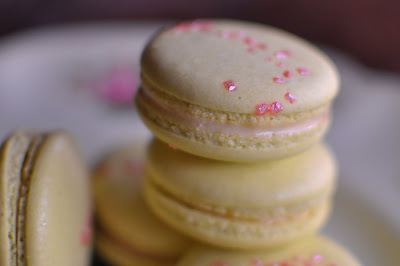 Basic Macaron Recipe : Italian Meringue Method
Ingredients
100g egg whites (I used mine that was aged in the fridge for 3 days, left out at room temperature before I used last night)
125g icing sugar
125g almond meal
125g caster sugar
34g water
food colouring
Method
1. Prepare your almond meal and icing sugar....weigh and sift and keep aside.
2.Prepare your baking trays with baking paper. I used 3 baking trays lined with Silpat.
3.Get ready with your piping bag. Get ready with your mixing bowls and a spatula. Get ready with a heavy bottom pan and a digital thermometer.
xxxxxx﻿
4.Divide the egg whites into 2 equal portions. Put one portion 50g into the almond meal icing sugar mix. Do not mix them together, then, put some food colouring on the egg white. I used Sugarflair's Gooseberry Green gel with a tinge of Lemon Yellow colour powder.....very springy eh!
xxxxxx﻿
5.Put the other portion 50g egg white into a bowl fitted into your stand mixer (I used a stand mixer this time), fitted with whip attachment. Set aside.
xxxxxx
6.Place water and caster sugar in a small heavy-bottom pan (like my bottom...haha!) over medium heat. Bring the mixture to boil. Do not stir as the sugar might crystalise...I just gently shook the pan while the sugar syrup was boiling....
xxxxxx
7.Once bubble starts to appear, start running your mixer with medium speed, whip the egg white until soft peak is formed, and keep the motor running...
xxxxxx
8.When the sugar syrup reaches 118Celcius, remove the saucepan from heat, and let cool slightly until about 115Celcius. Slowly pour this sugar syrup into the mixing bowl (I turned down the motor, whilst doing this so as to avoid any splatter).
9.Keep beting the egg white at medium-high speed until the mixture cools down, when you touch the mixing bowl, it feels like touching your skin. The finished egg white will be stiff and very glossy...it was glossier than the normal French meringue method.
10.Using a spatula, fold one third of the meringue into the almond meal mixture. I mixed simply quite vigorously until the batter is smooth and well blended.
11.Then, I mixed the remaining meringue in two additions, being careful so as not to overfold....rid the air pockets like you do for macaronnage with French Meringue method.
12.Pour into piping bag, and pipe the batter....tap your baking tray to rid of any trapped air.
13.Let the piped batter to dry...I did mine for 20 minutes and later used the oven drying method to dry the shells.
14.Bake at 150Celcius for about 20 minutes. 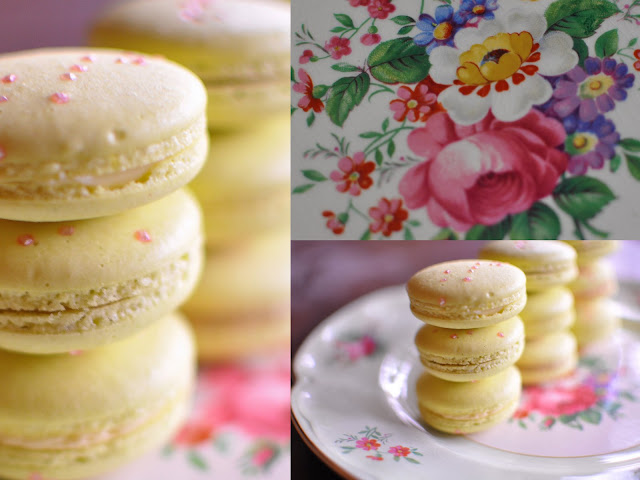 The verdict....shells were noticeably harder and not as brittle as those from the French meringue, the surface was smoother and shiny...love it love love it!! 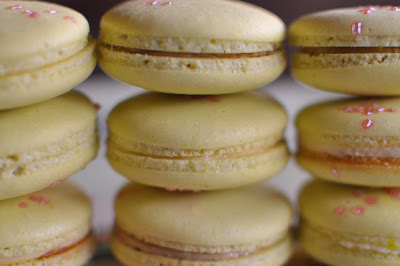 The batter yields about 45 macarons...I had a "fast sale" order from someone who was leaving for Riyadh tomorrow, so...I filled up with wahtever filling I had...Lemon Curd, Fresh Raspberry, Salted Caramel, Cream Cheese and French Pastry Cream.... 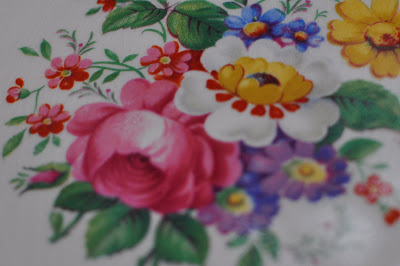 Email ThisBlogThis!Share to TwitterShare to FacebookShare to Pinterest
Labels: Macarons

Yani, kalau nak kurangkan gula boleh kot? I read a few blogs on IM and most sukat the sugars and almond sama banyak...;

Wish cud learn fr u how to make macaroons. They really looked yummy yum yum. Is it ok to eat many macaroons at one time?

I think I personally prefer the Italian macaroons to the French.The crunchiness makes all the difference!

ladymacaron...yup, am inspired by your macs!

jul! where are you< cant read all your blog post but i see you lead a very interesting life :p....come come i show you how to make macarons!

tina, boast your the kitchen prowess in you...yup italian mtd is for you!

nak tanya la. kat mana akak beli digital sugar thermometer tu ye? i've been trying to find it all over klang valley but to no avail.

dah 6 kali i buat macarons pakai IM method ikut ladymacaron20ten tapi baru sekali je menjadi. everything dah follow to the T tapi i always get wrinkly feet. frust betul! i suspect it must be the sugar temperature coz i main agak2 je. i takde sugar thermometer. thanks for your help.

your macs sangat perfect!! i jelous sangat2... dah try buat so many times... but then, my macs shell - cracked & no feet.... very frustrating... may i know , how d u control your oven ? d u need to bake it half time with bottom heating first, then another half time with top heating?? or..any tips?? uhuh.. sorry... bnyak tanya

Hi, I have previously attempted to make Macaroons with Italian method at home. When I left the uncooked macaroons outside for 2-3 hours, the shell does not formed at all. I also noticed that my macaroons was either out of shapes or they would become as hard as a rock after they were baked. Unfortunately, it failed to get the "feet". I have searched for many of solutions but I am still not sure what went wrong. Could you please advice me or provide me other way of solution?