Of Cakes and My Counting Days.....

Mannn...this back is really killing me...I was perfectly fine 2 weeks ago, suddenly I started having this heavy feeling.....must be the baby has dropped in the birth canal...I'll know this when I next go for my check-up!
I thought that June would be a breather for me, but alhamdulillah am booked until 26.6! More hantaran cupcakes coming and cuppies for doa selamat, thank you-s, etc...I just pray that I won't meletop before 26.6, which by then I should be around 36 weeks...hmmm very close!
Anyway, I had a bit of a breather last weekend, we went back to Ayer Baloi, the kids loved it there. I just read magazines, sewed the swaddle blankets, without the ofray ribbons that I bought from Haby's...dah tak tahan sakit pinggang, so I just did what I could!....Kak Ezza, I'll put up the pictures, later. I didn't even masak....no need when the lauks from the neighbouring warung is so sedap hingga menjilat jari, so just beli aje....have you tried assam pedas cili padi!? Nantilah, one of these days I will mengendeng from the makcik warung for the recipe!! It was only on Sunday that I made assam pedas ikan parang and ketam masak lemak...the kids makan the assam pedas with roti canai!! Typical of orang Johor!!
Anyway, here are some photos of my 3rd hantaran do for a wedding in Melaka...the theme was hitam putih...I suggested that the fondant be left in white saja....how can you have hitam-hitam when it was suppoed to be a joyous occasion and you are getting married...hubby kata...biarlah orang punya choice...but to make up for the black colour, I prepared a box decorated with black and silver laced where I put the cakes in.....okaylah kan!!! Hmm, sikit hari lagi I'll become a wedding planner pulak..... 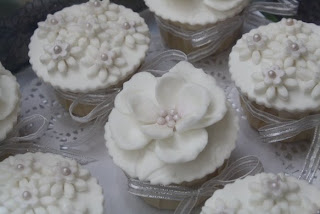 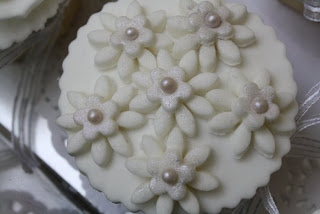 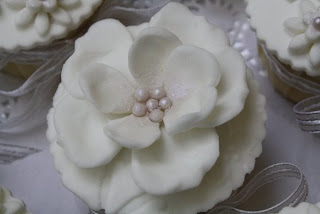 I just love the big petal flowers in the middle tu. Blooming jer. Take it easy Yanie. There'll be a lot of time for you to catch up after your pantang k.